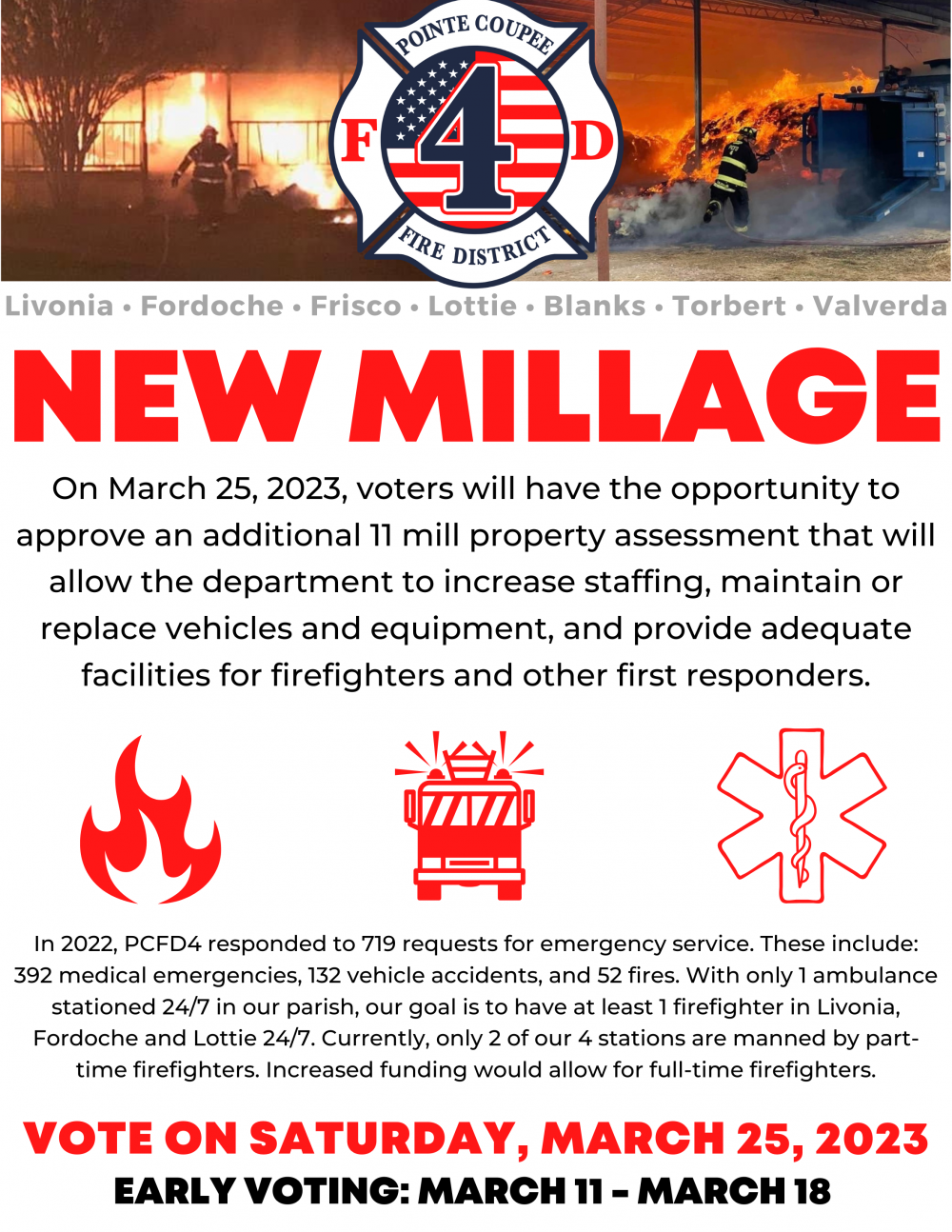 Shall Fire Protection District No. 4 of the Parish of Pointe Coupee, State of Louisiana (the "District") be authorized to levy and collect a special tax of eleven (11) mills (an estimated $874,000 reasonably expected at this time to be collected from the levy of the tax for an entire year) on all the property subject to taxation in the District for a period of ten (10) years, beginning with the year 2023 and ending with the year 2032, for the following purposes for the District: acquiring, constructing, maintaining and operating fire protection facilities and improvements, purchasing fire trucks and other firefighting equipment and emergency rescue equipment; paying the cost of obtaining water for fire protection purposes, including charges for fire hydrant rentals and service, and funding salaries and benefits of full time firefighters?

The said special election shall be held at the polling places for the following precincts, which polls will open at seven o'clock (7:00) a.m. and close at eight o'clock (8:00) p.m., in accordance with the provisions of La. R.S. 18:541, to-wit:

The estimated cost of this election as determined by the Secretary of State based upon the provisions of Chapter 8-A of Title 18 and actual costs of similar elections is $10,800.

Notice is further given that a portion of the monies collected from the tax described in the Proposition shall be remitted to certain state and statewide retirement systems in the manner required by law.

The said special election will be held in accordance with the applicable provisions of Chapter 5 and Chapter 6-A of Title 18 of the Louisiana Revised Statutes of 1950, as amended, and other constitutional and statutory authority, and the officers appointed to hold the said election, as provided in this Notice of Special Election, or such substitutes therefor as may be selected and designated in accordance with La. R.S. 18:1287, will make due returns thereof to said Governing Authority, and NOTICE IS HEREBY FURTHER GIVEN that the Governing Authority will meet at its regular meeting place, 160 East Main Street, Courthouse Annex Building, New Roads, Louisiana, on MONDAY, APRIL 3, 2023, at SIX O'CLOCK (6:00) P.M., and shall then and there in open and public session proceed to examine and canvass the returns and declare the result of the said special election. All registered voters of the District are entitled to vote at said special election and voting machines will be used.

THUS DONE AND SIGNED at New Roads, Louisiana, on this, the 5th day of December, 2022. 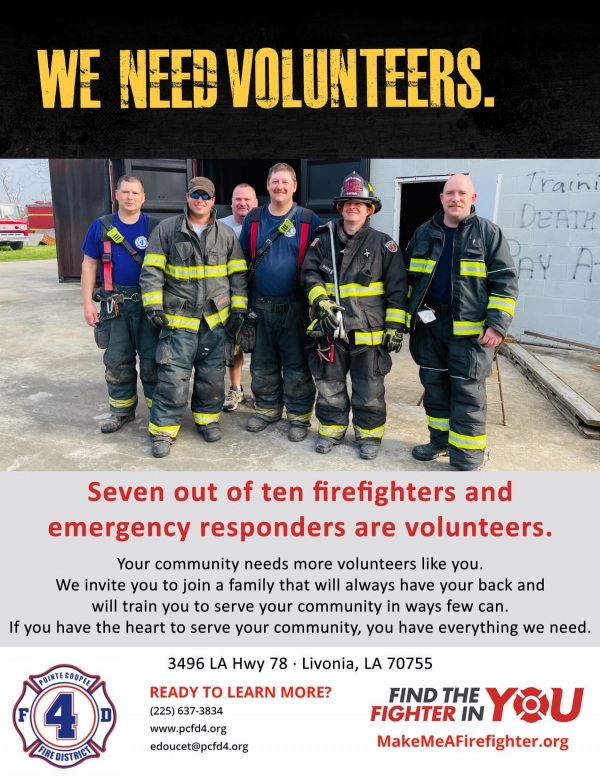 Pointe Coupee Parish requires that you display your address with 4 inch numbers visible from the road. Commercial addresses are required to have 6 inch numbers. If we can't find you, we can't help you.

Do you have some extra free time and looking for a wonderful way to give back to your community? If this is you then contact your local fire department and sign up as a volunteer. Most departments will sign you up, train you for the job and be glad to accept you as a member. All departments are required to run your driving record and do a background check on anyone applying. Membership applications can be found under the Files Tab.